This project was created by Joshua Warchol with significant use of open source code, tutorials and schematics from Adafruit Industries and other maker sources. As a software jockey by trade, none of this would have happened without the support and encouragement of the maker community.

I had been hacking on some of Adafruit's RGB LED waterproof flexi-strips (30 LED) for fun when my wife came up with the idea of using a number of these to add atmosphere to an otherwise bland lounge used for events at her school. Using the basic circut described in Adafruit's tutorial for this strip I was able to come up with a compact and affordable package. My wife ordered the bulk of the parts needed for five LED light sticks, and I got to work soldering up a storm.

The circuit is controlled by an Arduino or compatible microcontroller. This acts as the brains of the device, modulating the various LEDs to create a wide range of possible effects. I used an Arduino Uno model for prototyping, but when deciding what to use for the final project I chose Adafruit's DC Boarduino Arduino-compatible microcontroller board. The key benefits were its lower cost, small size and flexible power supply options. Unline the Uno, this board is not programmed directly over USB, but rather with an FTDI cable or FTDI Friend.

I followed the circuit described in the LED strip tutorial almost exactly.

First it implemented it using an Arduino UNO in the slick Lady Ada's Bento Box enclosure. When testing out the effects I was even able to fit the strip into the case coiled up. Very handy for lugging the project around while it was developing. 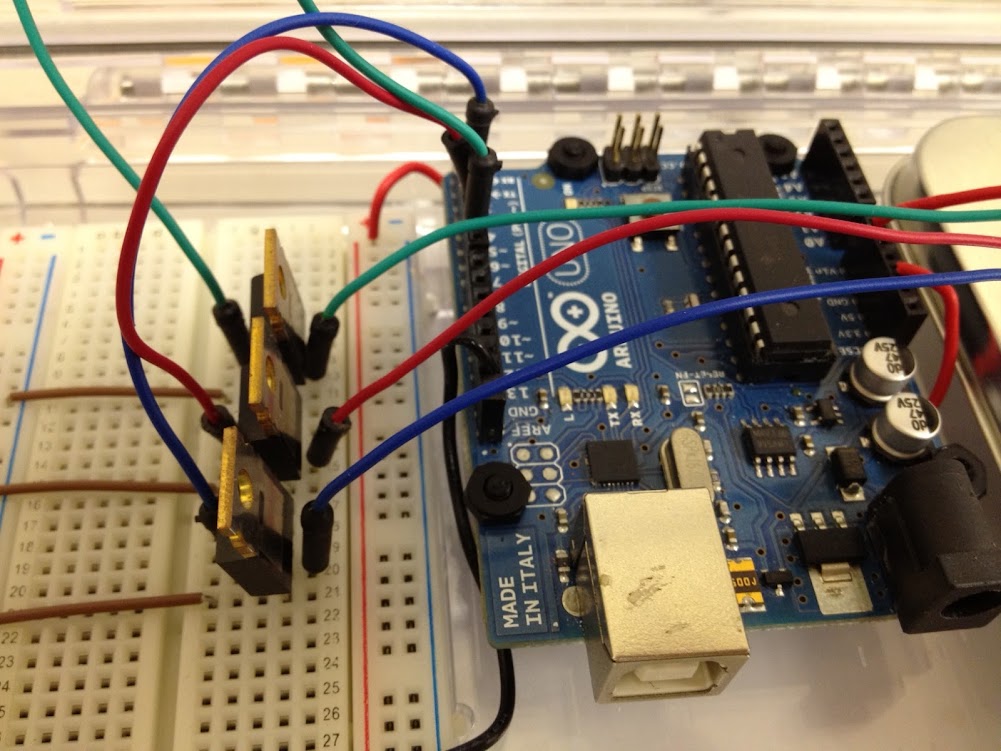 After that experimentation I started thinking how I wanted to actually deploy this. I knew I wanted to use the Boarduino on a circuitboard, inside a small box, attached to a long stick. I wanted most of the expensive parts of the project to be field replaceable and settled on using a breadboard layout with the Boarduino going off the end, centered, and the N-Channel MOSFETs along one side, with the opposite side having a terminal block where the LED strip would connect. Using a small breadboard I laid out a sufficient layout. 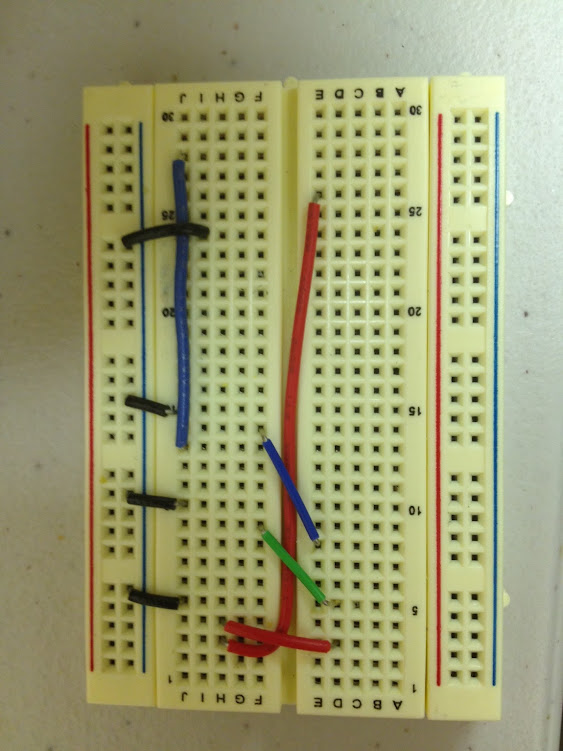 For the final installation I wanted something solid and well soldered to last years (and to keep my from having to go repair it). I used the Adafruit Perma-Proto Half-sized Breadboard PCB since it matched the layout exactly and is frankly gorgeous. It had center-line mounting holes and and I figured finding a box for it wouldn't be too hard. 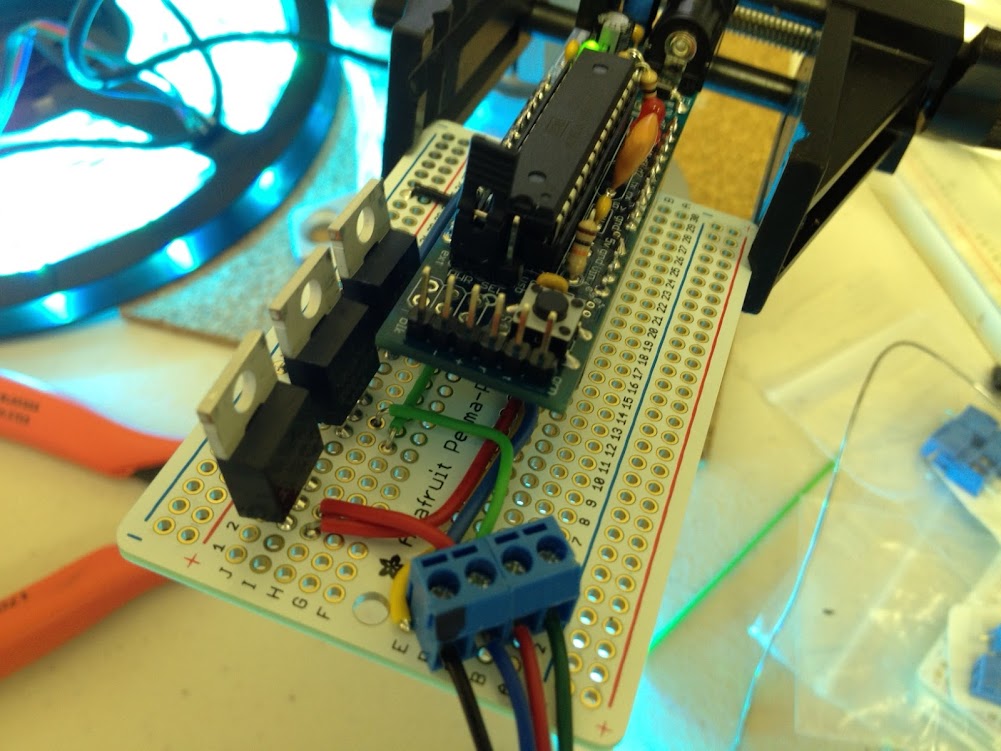 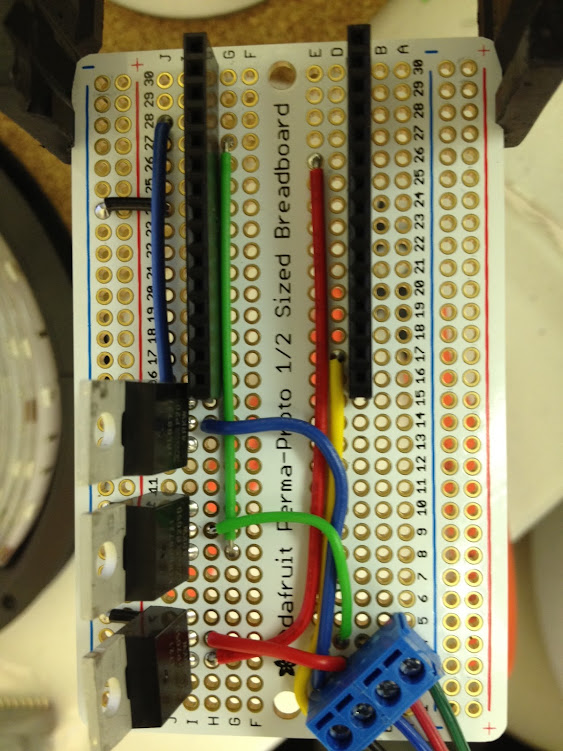 In my limited experience, finding and finishing the enclosure is often the hardest part of a DIY electronics project. I didn't want to use a dark plastic project box from RadioShack for this, so I went outside my element and entered a *gasp* craft store. In this case A.C. Moore here in Connecticut. In their wood section there are a number of different pre-made boxes that have hinged lids and clasps. They're rather mediocre Chinese-built pieces, but they do the job for a project like this. Wood is easy to work with and would take paint well (of course). To support the flexible LED strip I used a piece of poplar from Lowes measuring 1/4" thick by 2" wide and 48" long. Since the strips were a meter and the box wasn't very large, this was a perfect length. 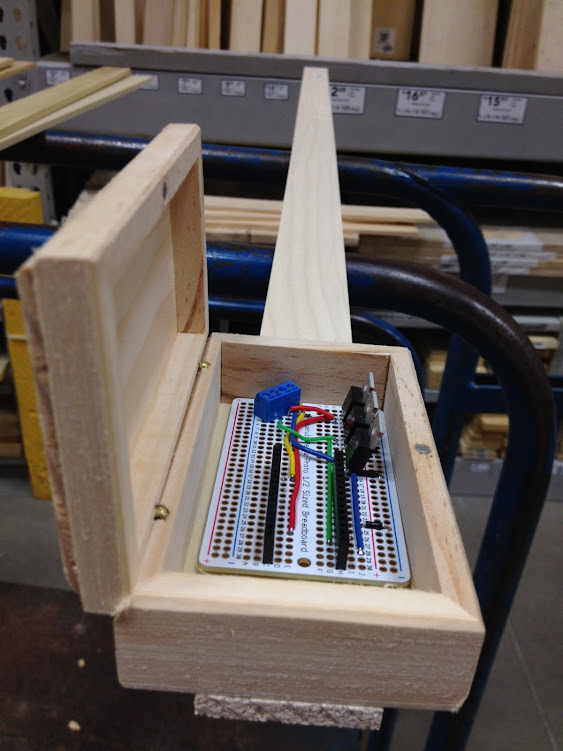 I drilled mounting holes through the very thin bottom of the box and through stick to create a solid place to affix the box and electronics inside it. Then I used a Dremel to notch out for the DC barrel jack. The project is powered by a 12V 1A power supply (wall wart), also from Adafruit. This turned out to be the most time consuming and PITA part of the whole project. If I do it again I'll look for a box where the barrel jack lands cleanly in a side wall and I can just drill a damn hole.

In order to look somewhat professional, last a long time, and accent the LED colors, I decided to paint the sticks and boxes white. The surfaces were sanded and cleaned then hit with spray primer and two coats of white spray paint. Once all that was dry it was time for final assembly. The board was mounted using 4-40 screws (3/4" works well), along with nylon washers and nylon spacers for the tight spot near the terminal block. Getting the wires for the LED strip into the terminal block was a bit finicky and I'd try to use a JST connector if doing it again. 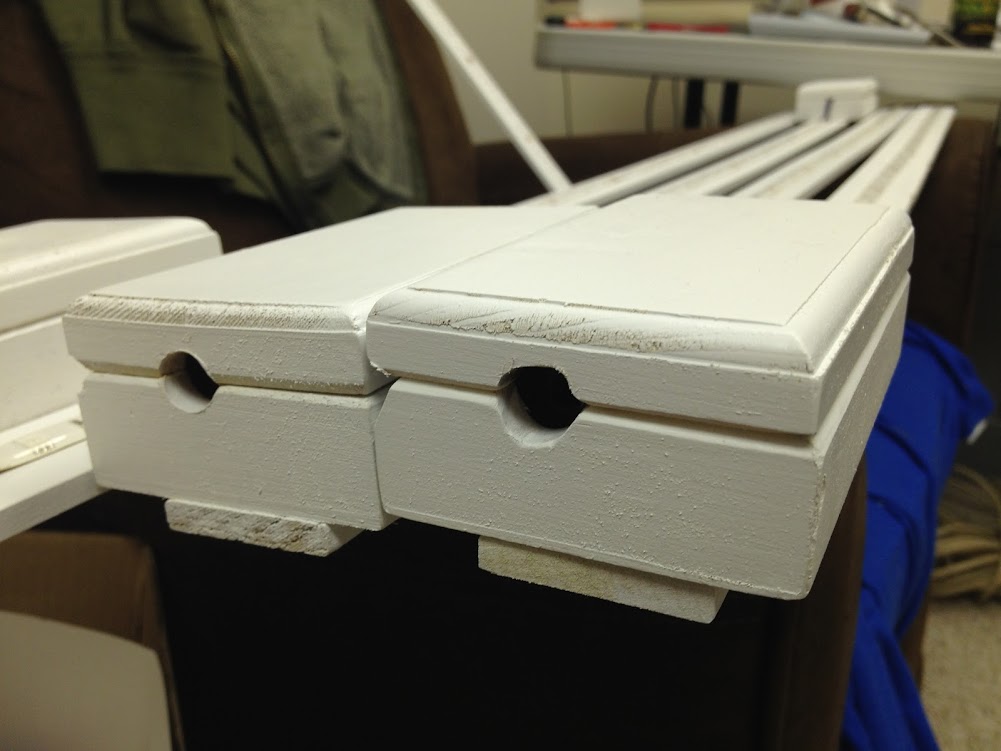 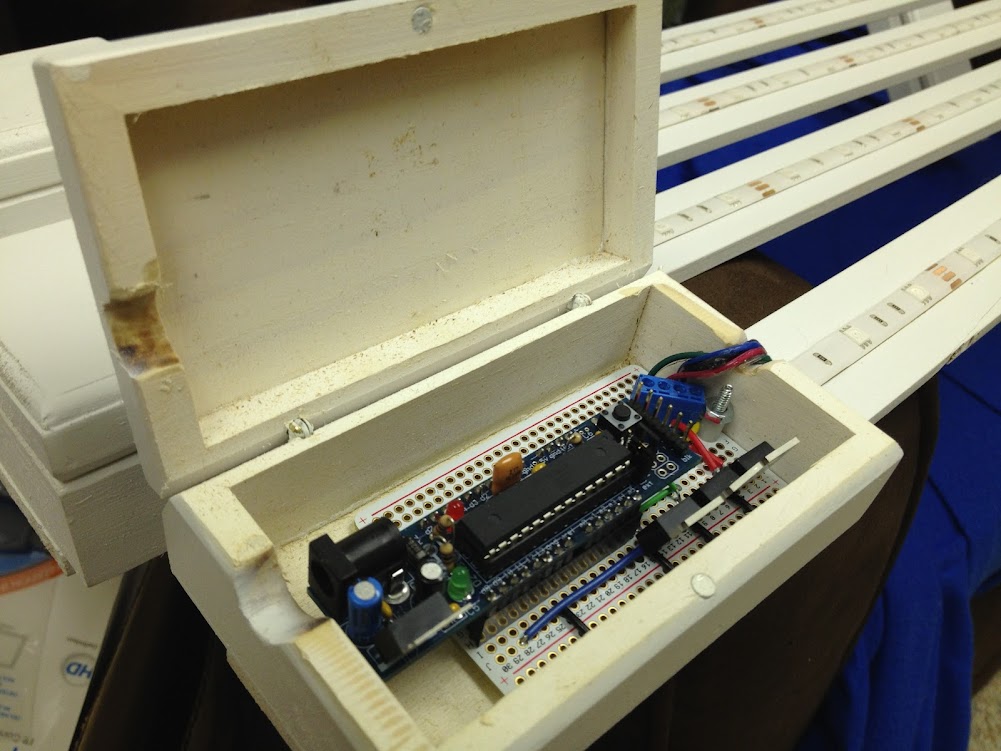 Finally it was time to put the LED Light Sticks to work. Headphone Disco is an event where two DJs equipped with twin-channel wireless headphones spin music for a party. Dancers can switch between the two channels and the current selection is shown via an LED on their earcup, so groups of people can choose to listen to the same DJ (or not). To an observer not wearing headphones it's a very strange experience since the room is rather quite, just the sound of dancing and an occassional person singing along. It's more fun than I'm making it sound, honest! 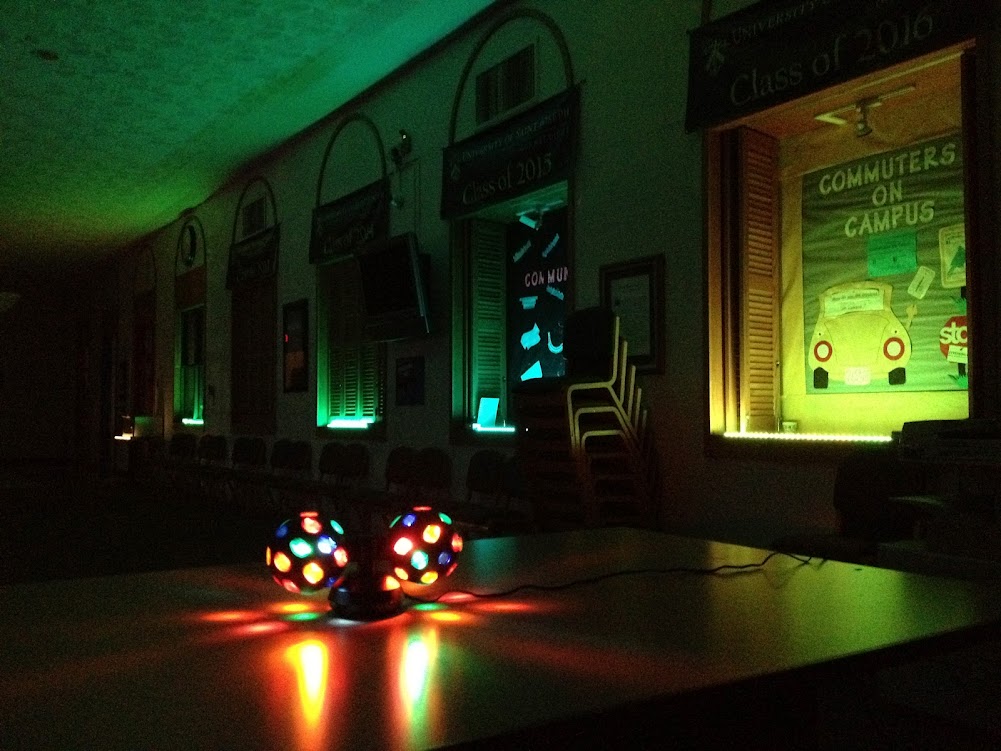 Music added to videos on YouTube to mask static. Remember, you can't actually hear any music during Headphone Disco unless you've got (duh) headphones.

Now that USJ's Student Activities department has invested in the sticks, they'll have them for use at events for years to come. Program them to twinkle red and green for Christmas. Beat red for Saint Valentine's Day. Green for Saint Patrick's Day. Blue and Yellow for school pride. Use some battery packs and take the sticks portable for club fairs, munchie truck, or sporting events.